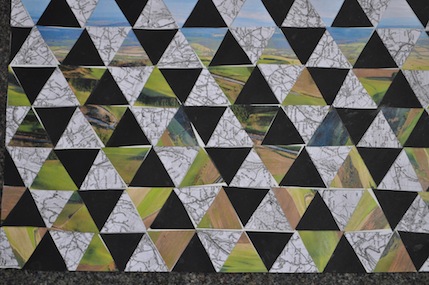 To celebrate the Clwydian Range’s 30 year anniversary in the summer of 2015 as an Area of Outstanding Natural Beauty, members worked with a number of artists to explore and celebrate the hill range.

Both Year 7 and Year 8 groups worked with artist Ruth Thomas, using the medium of print to create a series of striking images based on the hills, many with natural objects overlaid. Both groups also worked with Lisa Carter to explore the ranges through the medium of collage, using the process to re-imagine their surroundings. Year 8 members also got to work with Catrin Webster, this time working in the medium of oils, which was a completely new medium for most of them.

The exhibition was on display at Loggerheads over the summer months, before moving on to Plas Newydd in Llangollen for a month. Following this, it was displayed in Bodelwyddan Castle between October 2015and January 2016, where it has been seen by several thousand people.

Both groups also had the opportunity to take part in extra workshops with Ben Davis, creating large scale woodland flowers to enhance a performance by New Dance’s youth group, which took place at Loggerheads Country Park on Friday 17 July 2015.