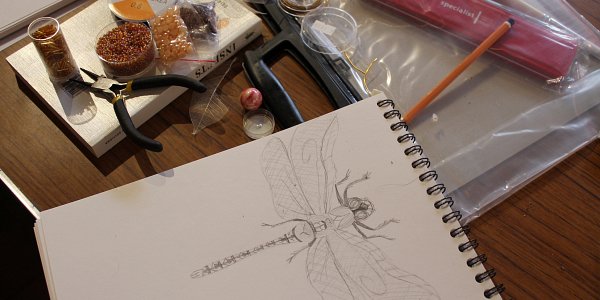 The core outcomes of Criw Celf are to develop artistic skills and to develop an understanding of artistic careers. This has been achieved this year through introducing the participants to a range of different artists, working with different techniques and materials. From Screenprinting with Rhi Moxon, to sculpture building with Alfie Strong, the diverse range of skills learnt has provided the opportunity for each participant to learn how to approach art briefs in a variety of ways. However, this second case study is based on the secondary outcome of Criw Celf. ‘ Increasing Confidence in relation to the visual arts’.

[Participant] came to Criw Celf in January 2016, a new member having shown an interest and talent in art at school. She had not met any other participants and was very nervous about having to not only meet new people, but learn new skills in a different way than she was used to in school. The [Participant’s] mother had mentioned on arrival to the first session that she was extremely anxious about the day and may text her mother during the session to let her know how she was getting on. The [Participant] worked really well with the other members, she listened to instructions and produced some wonderful illustrations inspired by the work of Jude Woods. After the session, her mother mentioned that the [Participant] had text her, but only to tell her that she was enjoying her day. [Participant] has grown in confidence over the past six sessions, she has learnt new artistic skills and met many new friends. Her experience proves that Criw Celf has a positive impact on not only the artwork of the participants, but the general wellbeing of the young person. This quote from the [Participants] mother explains the impact Criw Celf has had on her on a personal level:

“First of all, I’ll explain that we first heard about Criw Celf when a letter came home from [Participant’s sister’s] Primary school, and realised that it was also open for secondary school pupils too. I was keen to get them both there, so that they could do something just for pleasure, rather than for any kind of competition or exam. [Participant] is particularly short for her age, therefore many sports activities are not an option for her, as most coaches play to win, and pick their teams accordingly, which means she never gets picked for any team games. I think it’s fair to say that the [participant] does lack in self-confidence and low esteem, and doesn’t think she’s any good at many things.
So when I broached the subject of Criw Celf, she wasn’t keen to go at all, as her sister would obviously be in a different class. I was trying to encourage her to go, and explained that it would a great opportunity to meet new people, and so she went. She has loved it! As well as the wonderful opportunities the various artists has given her, she’s enjoyed meeting other people from different schools, and even one that is home-schooled. She’s produced some truly beautiful pieces of work, some of which we’ve framed already. She has, without a shadow of a doubt gained in so many ways by attending Criw Celf-she’s been inspired to come up with great ideas, and interacting with the artists and fellow pupils in a way that class sizes in her school can’t compete with. I’m sure that after her time at Criw Celf, she’ll be far more open to throwing herself into new opportunities in the future.
I can’t thank all the Criw Celf team for providing the children of Wrecsam with this truly valuable experience-my two daughters have benefited greatly form it all.” Mother of [Participant]